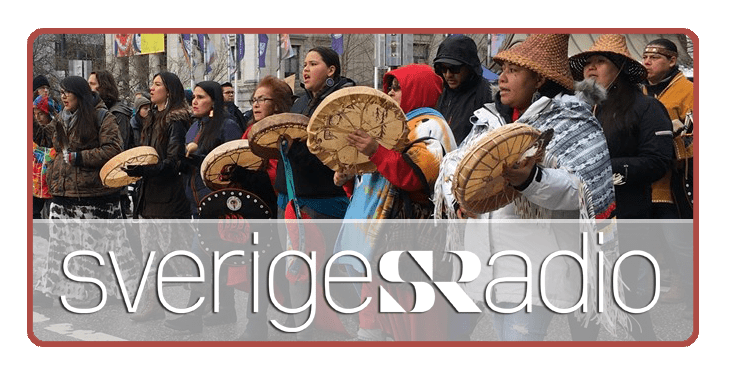 Aug 21, 2018—Stockholm, Sweden: This summer IndigenEYEZ made its debut in European media with this audio broadcast and article about the collective awakening of Indigenous peoples across Canada by Sweden Radio journalist Palmira Koukkari Mbenga.


Thanks to IndigenEYEZ facilitator Allan Thomas Lindley for sharing his reflections and experiences in this article. 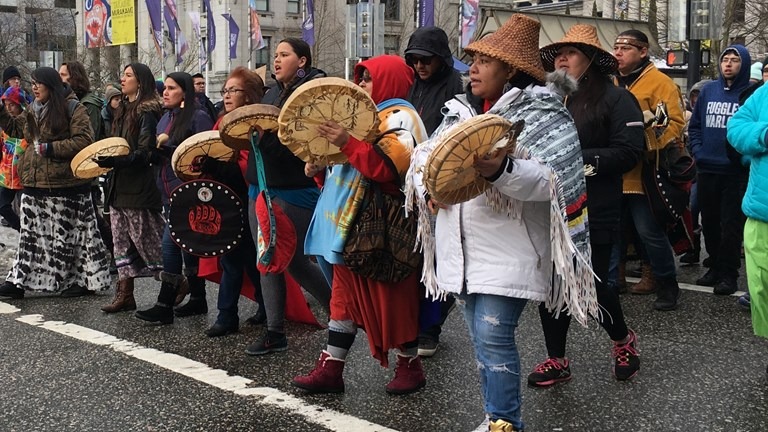 The Indigenous Population in Canada Recovers its Culture

In Canada, many of the indigenous people are still struggling with racism, discrimination, and social vulnerability. During the spring of 2017, the deaths of two indigenous youth, led to great anger and protests.

In contrast to the struggle, a movement of young people who are proud of their heritage is also taking place, and it is making a significant impact on the music and cultural scene in Canada. 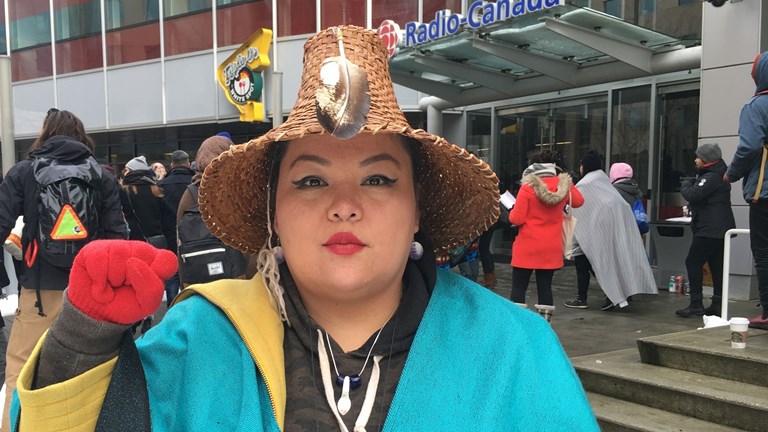 At a protest outside of a CBC station in Vancouver, Jerilynn Webster, who goes by JB The First Lady, reads a new poem. The protest is to demand justice for 15-year-old Tina Fontaine, found dead in a river in Winnipeg. She is one of the estimated over 1,200 murdered or missing indigenous girls and women in Canada. Her suspected murderer was released in court, in the absence of evidence. Now many ask—if not he, then who was it?

Shania, 22, is participating in the protest and is one of the many who testified, saying that it is dangerous to be an indigenous woman in Canada. However, the cultural resurgence and resilience she has seen during her lifetime makes her hopeful: “I’ve seen people become stronger and more loud during my time on earth. It’s healing to see us come out like this—it really shows that future generations will make sure that our voices are heard,” says Shania.

Jerilynn Webster is one of many young indigenous people who use music, art, and culture to tell her story. Just a week before reading the poem for Tina Fontaine, she arranged a protest for Colten Boushie. A young man from the province of Saskachewan in central Canada, shot dead by a white farm owner. The farm owner said it was an accident and was released.

Jerilynn Webster says that the opportunity to grow and have a minimal quality of life for indigenous youth is still not universal today in Canada.

“In the case of young indigenous peoples, there is an imbalance. You have young people who reclaim their culture and sing and drum. At the same time, there are major problems with child care, suicide, child poverty. All the bad statistics you can think of, we’re in the top,” says Jerilynn Webster.

Some believe that what is happening on the cultural stage and in society in Canada is a collective awakening.

“My name is Jarret Martineau from Frog Lake First Nation in the northeastern part of the province of Alberta. I have lived here in Toronto in recent years.”

Music journalist Jarret Martineau calls it the Next Wave of young indigenous artists. Several of the artists break through and many of them use their platforms to convey a message about racism and discrimination.

“They do not always have a confrontational approach to politics, but talk about what kind of future they want to see,” says Jarret Martineau.

He believes that one of the reasons why this scene is currently blossoming is that many of the artists return to the communities they come from.

“It may be by acting more in indigenous communities; donating time, money, mentorship, or whatever it is – that’s a big reason why the scene is blossoming,” he says.

Canada’s indigenous population consists of just over 1.5 million people, which is just under 5 percent of the total population. They can be divided into the First Nations, Métis, and Inuit groups. Most indigenous peoples are First Nations; Under this concept, over 600 different groups of people all have their own cultures and languages. 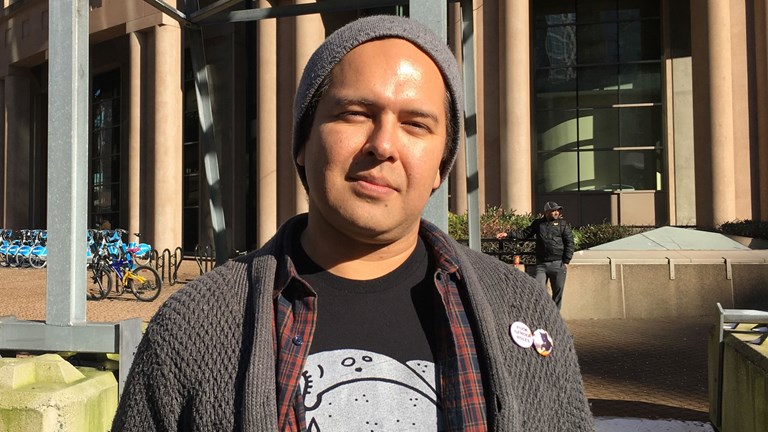 “My name is Allan Thomas Lindley. I’m Thompson Okanagan and belong to the Nlaka’pamux people on my mom’s side. My grandmother is Cree, from Mistawasis in the province of Saskatchewan.”

Allan Thomas Lindley works for an organization called IndigenEYEZ which, among other things, helps people who struggle with the mental and emotional impacts of living in a colonized world. Lindley is two-spirited, one of up-to five belongings recognized by many groups of indigenous peoples. This means that they neither self-identify as male nor female.

Allan Thomas Lindley says that one of the biggest challenges for the native population in Canada today is that they know so little about who they are and what they have been exposed to.

“In the province of British Columbia there are over 200,000 indigenous peoples, and from that group there are 60 different dialects from 30 different language groups. But many in the majority of BC’s population don’t know that. They only see us as “Indians,” a term we do not use,” says Allan Thomas Lindley.

For a long time there were residential schools—boarding schools that indigenous peoples had to send their children to—where many became victims of violence and abuse. The last school closed in 1996 and the Canadian government has officially apologized for how the children were treated at schools.

Allan Thomas Lindley works with young people in one of Vancouver’s most socio-economically vulnerable areas where homelessness and addiction are major issues. Lindley says that many young people find it helpful simply to learn that the things they and their parents have lived through can be attributed to the trauma of residential schools.

“So to the young indigenous peoples I meet, I always say: This happened to us, but it does not define us. Our story is with our ancestors.” 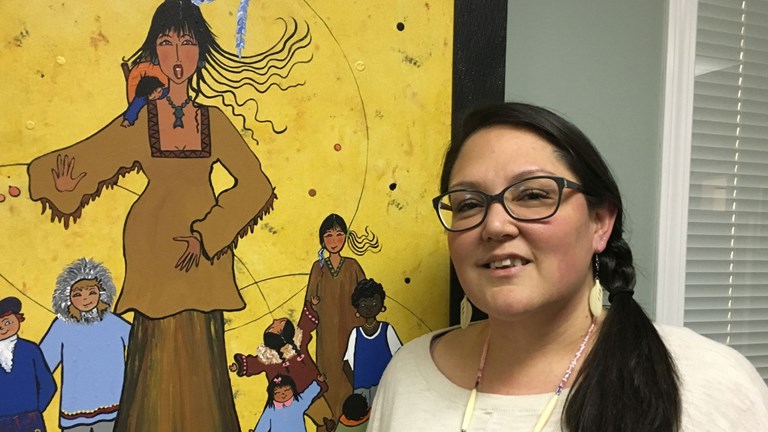 “My name is Red Butterfly Woman. I’m from Siksika First Nation on my father’s side, that is, the Blackfoot people. I am Austrian, Danish, Norwegian and English on my mother’s side. My English name is Darla Rasmussen.”

Another organization that works with Indigenous youth is Through an Aboriginal Lens.

Red Butterfly Woman says they try to be good role models for the young people they meet through their work, and inform them about their cultures and their origins. Today, Rasmussen is proud of being indigenous, but it has not always been so.

“I grew up in a very racist and prejudiced society. I used to say that I was Spanish or from Hawaii, because it felt more accepted than being indigenous. I did not start fully accepting myself until my late 20s,” says Butterfly Red Woman. She feels a collective awakening.

“I think this awakening is healing. Some of us begin to heal, I am one of them. We pick up others and they join us and take us forward. We do not want to put up with this shit anymore. We are tired of being depressed and told us that we are not worth anything,” says Red Butterfly Woman. 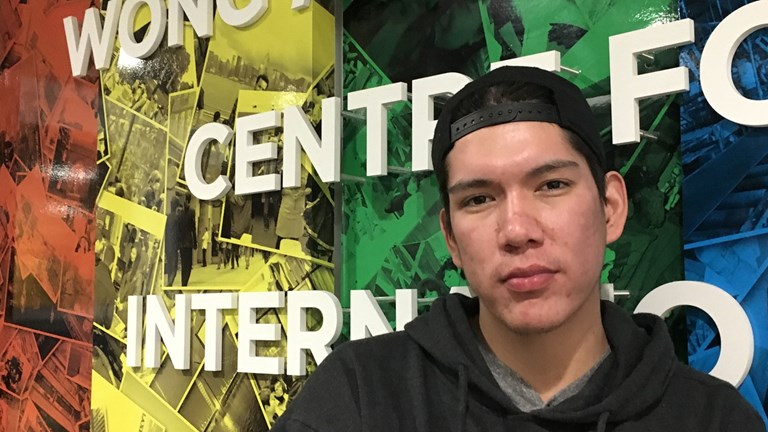 “My name is Theoren Black Kettle. I am 25 years old and come from Calgary, in the province of Alberta. I’m from Siksika First Nation, we belong to the Blackfoot people.”

At Capilano University in North Vancouver, the atmosphere is focused among the film students even though it is late. They are recording scenes for different projects.

One of the students is Theoren Black Kettle. He is in a film-making program specifically for indigenous students. He is one of these young people who have made the journey from self-hate to feeling valued and valuable.

“I’ve met my demons and I’m so proud of being First Nations. But it did not happen overnight. It was a process. When I was younger, I always tried to hide it, even though you can not change what you look like. I was not myself because I did not feel accepted,” says Theoren Black Kettle. Now he is proud of his lineage and rich culture.

“I’m proud we’ve survived, we’re still here. I cannot be angry with history forever, I can only say that it has been very educational to grow up as an indigenous person. I have never been more open minded than where I am today.”


Now that he has released anger and started to love himself, he will not hold back.

Want the latest news about IndigenEYEZ events for youth and adults? Sign up for our newsletter.